Can Cats Eat Pumpkin Pie: Effects On Health And Alike

Your cat likes to munch on pumpkin pie and you wonder if you should stop that? Check out this article to answer the question of "can cats eat pumpkin pie".

Although cats have a reputation of being picky eaters, they also like take a bite of everything in the immediate surrounding that attracts their curiosity. So if your fluffy friend catches glimpses of pumpkin pies, it's highly likely that he/she is going to ask for a few pieces. As a generous cat owner, you initially intend to share the pies with your pet. However, you suddenly remember that certain foods that humans enjoy might give cats serious troubles. As a result, you cautiously withhold the pies but a question lingers in your head: "can cats eat pumpkin pie?"

In case you cat express special interest at pumpkin pie and you are hesitant to satisfy its desire, this article got something for you. Down below, you would be introduced to what experts have to say about the effects of pumpkin pie on cats. Overall, it's a good idea to refrain from giving human food to cats unless you know that the pets could safely consume such foods. So can cats eat pumpkin pie without experiencing health ailments? Take a good look at the following information and you should be able to find the answer to that question.

The Contents Of Pumpkin Pies 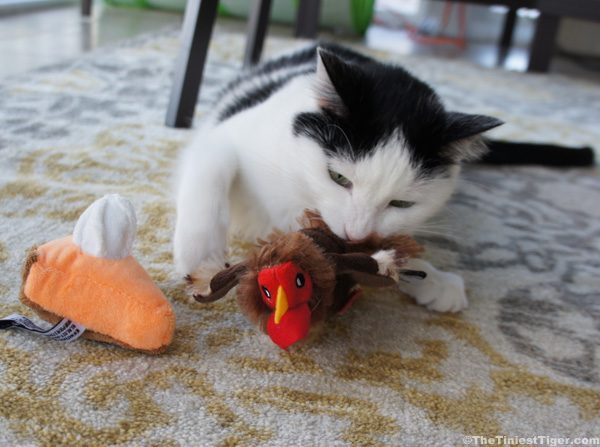 Before we get to the question of "can cats eat pumpkin pie?", it's important to learn about the content of the average pumpkin pies. While most people love to have a slide of such pies every now and then, few know the exact composition. After you know what pumpkin pies tend to pack inside them, it's a breeze to conclude if they are safe for cats or not. Excluding pumpkin, there are around 5 common things that people put in their pumpkin pies: cinnamon, nutmeg, clove, ginger, and sugar.

While small amounts of dried cinnamon should not give your pet a hard time, a large spoonful of the spice would lead to respiratory issues. The situation is even worse if you use extracts as cinnamon oils could be toxic to cats in small amounts.  Generally speaking, overdoses of cinnamon often cause liver diseases, diarrhea, low blood sugar, vomiting, unusual heart rate and so on. Because of that, experts recommend that you prevent your cat from getting close to foods that use cinnamon in order to protect its delicate health.

People use nutmeg for the grating of pumpkin pies but the spice happens to contain myristicin which is a dangerous substance to cats in general. If your pet unknowingly takes in a large amount of nutmeg, vomiting, fluctuating blood pressure and abdominal pain follow suit. In extreme cases, seizures, disorientation, and similar issues would occur. Hence, it's wise for cat owners to keep the pets from coming into contact with nutmeg/nutmeg-filled foods. If things take a turn for the worst, take your cat to a veterinary clinic.

For people that have mouth pains, clove is a natural pain reliever thanks to its ability to cause mild numbness. That being said, the presence of eugenols in the spice means that it's harmful to the liver of cats. Once ingested, clove lead to a couple of issues like staggering, tremors, vomiting.... in cats. Ironically, while cats should stay away from clove regardless of the form, dogs have no trouble absorbing the spice though. In any case, it's of utmost importance that you pay attention to your cat and cut off its access to foods that use clove.

People use ginger and its extract to treat stomach upsets in cats so you could say that the spice is relatively safe for your pet. Nonetheless, just in case, you should avoid giving your cat too much ginger at once. Additionally, while some cats like the taste, it's widely advised that you don't feed your pet fresh gingers.

Cats like to eat sweet stuff so sugar would not disturb their digestive system, right? Well, it's true that the pets are quite fond of treats that have a sweet flavor but pumpkin pies are packed full of sugar. That means if you allow you to freely go after the pies, it might end up with excessive weight gain, diabetes and other health troubles. As the majority of ingredients in pumpkin pie prove to be harmful to ordinary cats, the answer to the question of "can cats eat pumpkin pie?" is "No, they cannot". Keep your favorite dessert in the fridge, cabinet and similar locations so your fluffy friend could not munch on it.  Additionally, if your pet somehow manages to get ahold of the pies, consider calling your vet for a professional assessment.  Refrain from acting rashly as that could worsen the relationship between you and your cat.

Benefits Of Pumpkin On Cats Despite the facts that you should not permit your pet aces to pumpkin pie, pumpkin actually offers several benefits to the health of most cats. Here is a quick summary of the reasons why pet owners often add pumpkin to the diet of their cat.

Thanks to its fiber-rich nature, pumpkin generate a feeling of fullness and therefore, cats no longer have the need to take in additional calorie. For cats that are overweight, pumpkin could be used to aid in weight loss but as always, remember to consult the vets before doing anything.

Pumpkin tends to absorb water in the vicinity so it's a natural solution when it comes to mild diarrhea. That is why if your pet experience diarrhea all of sudden, some pumpkin work wonders. However, in the case your cat diarrhea fails to subside after 24 hours, pay a visit to the local veterinary clinic.

A lot of things could lead to constipation in cats but by stimulating bowel movements., your pet should be able to defecate with relative ease. Since pumpkin is rather moist, it's capable of getting the gastrointestinal tract moving in a regular pattern which promotes activity in the bowel region.