"Is Hyperthyroidism In Cats Painful?": Essential Information For Pet Owners

Hyperthyroidism is among the most common endocrine disorders found on old cats.  Is hyperthyroidism in cats painful? Find out the answer in this article.

Worry that hyperthyroidism could affect your cat in the near future and wish to acquire more information about that condition? If that happens to be the case, this article got just the thing for you. Right down below, you would be provided with virtually every detail regarding cat hyperthyroidism from potential causes to proper treatments. Overall, you could minimize the effects of hyperthyroidism on your cats and take care of the symptoms without much difficulty. As long as you have a firm grip on the fundamentals listed here, your and your furry friend should be able to successfully tackle hyperthyroidism.

Check us out for various cat product reviews

Hyperthyroidism in Cats: What Kind Of Endocrine Disorder Is It?

To put it plainly, cat hyperthyroidism tends to take place once there is a sudden increase in the production of thyroid hormones (T3 and T4).  The organ that is responsible for the thyroid hormones production is the butterfly-shaped thyroid gland in the cat neck. Considering the fact that hormones released by the thyroid gland control the body metabolism, hyperthyroidism causes extensive disruptions to the daily lives of affected cats. About the potential of developing hyperthyroidism, a considerable portion of middle to old-aged cat population (over 10-year-old) is vulnerable to the endocrine disorder.

Is Hyperthyroidism In Cats Painful? 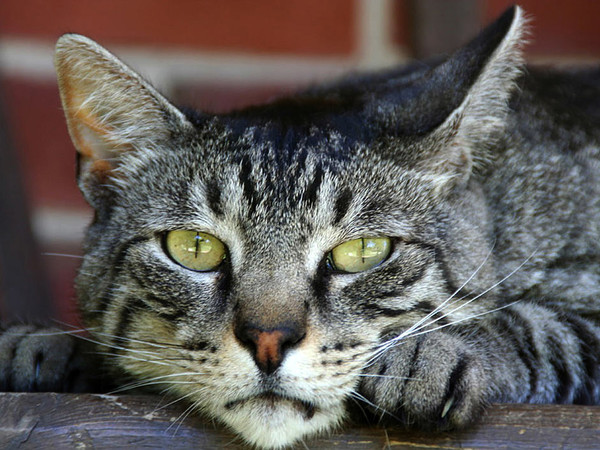 Since most cat owners often care a lot about their pets, "is hyperthyroidism in cats painful?" is a usual concern.

For most of the time, hyperthyroidism should not cause any noticeable discomfort on its own.  That being said, because of the reach of the thyroid gland hormones, certain secondary health problems are to be expected. In certain cases, hyperthyroidism would cause inflammation/infection in some areas and that could make your cat feel great pains. For instances, the bladder is easily affected by endocrine disorders. So it's not uncommon for hyperthyroidism-affected cats to cry while using the litter box due to urinary difficulty.

Symptom Of Hyperthyroidism In Cats

As mentioned above, hyperthyroidism develops in a fairly subtle manner and it causes additional medical issues throughout the cat body. That is why it's simple for inexperienced pet owners to mistake hyperthyroidism for other types of age-related conditions. In fact, some people might even think of hyperthyroidism symptoms as signs of old ages. Sure, old cats could get various diseases as well as experience reduction in body functions.  Nonetheless, if your cat exhibits some of these symptoms and he/she is over 10 years old, schedule an examination session with the local veterinary clinic. 
Cats that got hyperthyroidism to tend to have high metabolic rates and that motivate them to seek extra calories to compensate. Therefore, hyperthyroidism-affected cats could take in up to twice the amount of food that they usually eat every day. If the cats fail to acquire more food by themselves, they would hang around the human caretakers begging for meals. However, in some cases, the appetite of the cats could reduce because of mental troubles: depression, apathy and so on.

A Steady Loss of Weight


No matter what happens to their usual appetite, weight loss is a rather common sight in most hyperthyroidism-affected cats. At first, you could only notice the issue through the shrinking of muscle mass right around the cat neck region. In later phases, the loss of weight would spread to other body areas and death from calorie shortage (starvation) is a possible outcome of hyperthyroidism.


As cats age, they mostly become pretty sedentary so sudden increases in activity tend to indicate an underlying medical problem. That means if your cat exhibit unusual restlessness, aggression and alike, you probably have to take him/her to a vet for a thorough examination. Cats that are suffering from hyperthyroidism might have a low tolerance when it comes to movement restraint so be careful.


Hyperthyroid cats often experience mild kidney failures and that causes them to visit the litter box from time to time. Hyperthyroidism makes it difficult for cats to accumulate their urine and constant urination is inevitable. In addition to that, compulsive water drinking without actual need is far from a rare sight in hyperthyroidism-affected cats. Is hyperthyroidism in cats painful? Well, your cat would be subjected to great pain if there is a bladder problem going on and he/she need to pee too frequently.


With the exception of heart failure and psychogenic effects, breathing difficulty in cats is often caused by hyperthyroidism and it's considered to be a distinctive sign of the disorder. Cats that got hyperthyroidism pant rapidly in warm environments and severe respiratory distress could occur if the cat is stressed. Because of that, hyperthyroid cats need to be handled and examined in a careful manner.

At this point, you already know is hyperthyroidism in cats painful or not along with various characteristics of the disorder. Now let's take a look at what you could do to improve the situation. Namely, there are a total of 4 options available at your disposal: medication, surgical intervention, dietary therapy, and radioactive iodine therapy. Each type of hyperthyroidism treatment got its own advantages and disadvantage, there is no such thing as the perfect solution. To decide which treatment option you should choose, you have to take into account your own financial capability as well as the pet health status.