Cat Litter That Doesn't Stick To Paws: Characteristics And Suggestions

Your pet keeps scattering the litter all over the house? Then check out this article and find a cat litter that doesn't stick to paws.

Normally, the average domesticated cats would visit the litter box around 2 – 3 times a day to answer the call of nature.  Because of that, the litter box itself plays a rather important role in the daily activities of your fluffy friend. Nonetheless, as cats have furry toes, they might carry the litters from the box and spread them around the house. To tackle that issue, you need a cat litter that doesn't stick to paws but is it absolutely necessary? There are numerous cat liters available for purchase on the market nowadays, how could you tell which one is good?

Want to stop your cat from leaving messy trails of litters but don't know much about non-tracking material? If that is so, you come to the right place. In this article, you would be provided with everything you must keep in mind while searching for cat litter that doesn't stick to paws. Generally speaking, different cats like different litters and that is why it's essential for pet owners to get the right one for their cat.  If a cat like what it sees in the litter box, it would likely visit the place and take care of its business more often.

The Truth About Non-Tracking Litter: An In-Depth Analysis 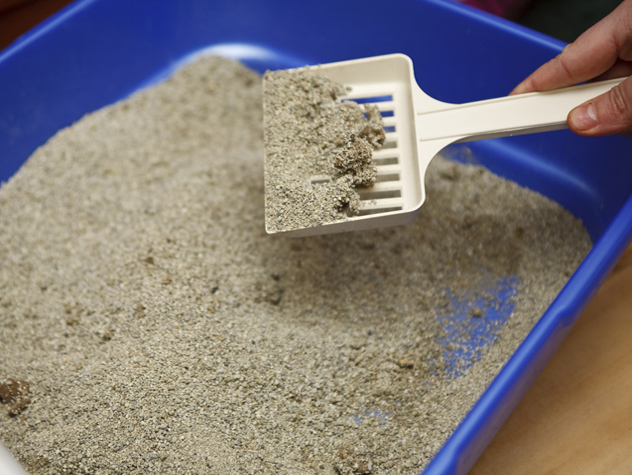 Overall, a cat litter that doesn't stick to paws tends to be thought of as a non-tracking litter. However, nothing could guarantee that a non-tracking litter would not stick 100% of the time. Some cats have exceptionally furry pawn compared to others that cause them to collect and spread litter no matter what material you decide to use. Additionally, a couple of cats also happen to be avid diggers which exacerbate the situation. As a result, it's strongly recommended that you prepare to implement supplement methods to deal with the scattering litters.

With that covered, let's take a look at the characteristics of non-tracking litters and see why they are able to minimize spreading incidents. Usually, you need to assess a total of 3 criteria in order to determine that a particular litter is a solid non-tracking product or not.

Cat litters utilize multiple materials from natural to man-made and therefore, the choice of material possesses substantial influences when it comes to sticking tendency. For most of the time, you should prioritize litters of natural origin as they are often tracking-resistant and affordable. Walnut, pinewood and corn-based litters should be superior options to clay-based products. Another benefit of these natural litters is that most cats with allergies prefer to use them than man-made litter. By all accounts, natural litters perform well in their roles.

It's a no-brainer that large-sized litters are highly unlikely to stick to the pawn of cats. If the litters do stick, the pets shall notice the material near-instantly and get rid of the unwelcome guest as they leave the box. In addition to the size, the shape of a litter contributes a fair share to its tracking-resistance as well. To put it plainly, several types of litters have shapes that let them escape being caught by the furs and crevices of the cat pawns.  Of course, these traits only reduce the likelihood of sticking and not outright eliminate it.

If you are certain that a specific litter is non-tracking and it suits your cat, feel free to acquire more regard for the brand. That being said, in this industry, some brands just produce better litters than the rest. So if you have the time, check out the brand in question and see what people talk about its litter such as sticking tendency, cleanliness... User feedbacks provide insights into the performance of the litter and if you see favorable reviews, the brand is ought to be a reputable one.

Clumping Vs Non-Clumping: Which One Offer Greater Tracking-Resistance Pet owners that want to get the most out of each batch of litter like clumping materials as they reduce litter wastage during daily cleaning. Moreover, some people claim that as the litters clump together and then solidified, they make it harder for the cat paws to catch them unknowingly. Nonetheless, it's worth noting that while clumping litters are designed to bond with each other, the paws could catch them in their original form.

Hence, about tracking-resistance, there are negligible differences between clumping and non-clumping cat litter.

Check us out for various cat product reviews!

Now you what is a cat litter that doesn't stick to paws and how to identify one, here are some products for your consideration.

While it's not exactly cheap, the value of Dr. Elsey's Cat Ultra Premium Clumping Cat Litter more than justifies the high acquisition costs. The heavy, non-tracking granules make sure that the litters stay in the box instead of traveling with your pet.

Want a non-tracking litter that excels at odor elimination? Then take a quick glance at Arm & Hammer Clump & Seal Litter.  Featuring microparticles, the litter is less abrasive to cat paws and that is why it possesses a high tracking-resistance.

For pet owners that have more than one cat to take care of, World's Best Cat Litter Clumping Formula is the way to go. Made of biodegradable corns, the litters trap ammonia smell efficiently and effectively while remaining dust-free. That means it's suitable for kittens with allegories as well as pipe disposal.

Being a wood-based litter, Feline Pine Original Cat Litter is able to absorb unpleasant smells and keeps them contained.  Since the liter contains no chemical and synthetic additives, your pet would not sneeze as it uses the litter box.

Utilizing pellets, Purina Tidy Cats BREEZE Cat Litter is well known for its excellent tracking resistance. While spillages occasional occurs, rest assured knowing that you could take care of them without much difficulty.