Cat Pee On Dog Bed: What Is The Best Solution

Tired of washing the dog bed every time your cat urinates on it? Then read this article and learn how to properly resolve the "cat pee on dog bed" issue.

Overall, cat and dog are both adorable creatures that have positive effects on the daily life of their human caretakers.  Despite the fact that these pets could cause various problems from time to time, most people still see them as integral members of the family. That being said, raising dogs and cats together is far from a walk in the park, there are numerous troubles that you have to solve.  Among the issues that could happen, "cat pee on dog bed" is often considered to be the most annoying one. The smell of cat urine is hard to endure and you also have to wash the dog bed repeatedly which could strain your mental health.

Feeling nearly helpless as your multiple attempts to stop your cat from urinating on the bed of your dog fail? If that happens to be the case, this article could offer you much-needed cat tips.  Down blow, you would be shown a couple of reasons why your cat decides to pick the dog bed as his/her favorite peeing spot. Once you know what is causing your issue of "cat pee on dog bed", you could devise a proper solution. Moreover, a couple of tips and tricks for raising dogs and cats in the same house are present as well. Check out the provided information and you would no longer have to stress yourself out while dealing with your pets.

Why Your Cat Pees On The Bed Of Your Dog 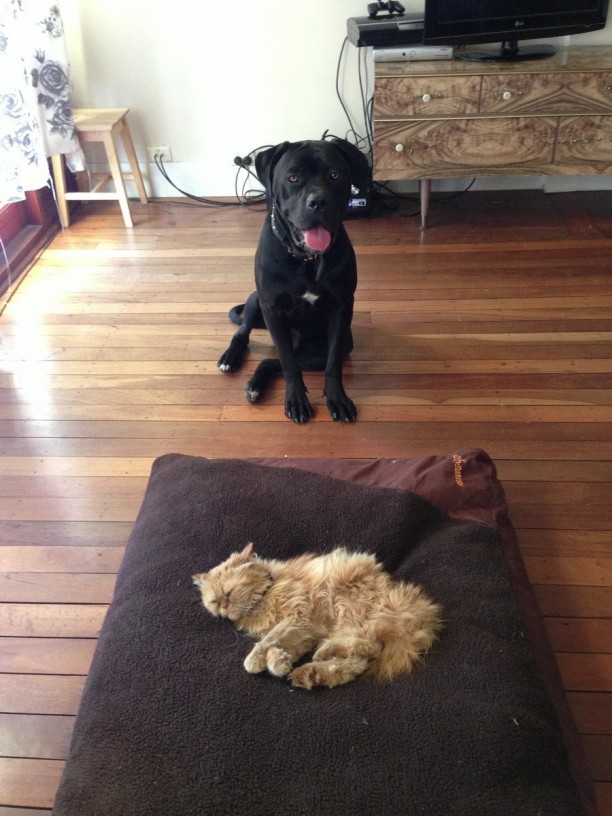 As soon as you see that your cat keep urinating outside of the litter box, it's strongly recommended that you schedule a vet appointment. Cats that are suffering from health issues might be unable to control its peeing and that is why you need to visit a veterinary clinic. By treating the underlying illness, the "cat pee on dog bed" issue should be taken care of without much difficulty. Since the cat could associate the litter box with pain even after the treatment, you need to train his/her on how to use it.

In the case that you have several cats, one of them may choose the dog bed because there aren't enough litter boxes to go around. The rule of thumb is to always keep the number of litter box larger the number of cats by one. Clean the boxes on a daily basis since if they got too dirty, there is a good chance that your cat would not use them. Similar to human, most cats prioritize privacy and prefer to take care of their business in a relatively secluded location. Remember that when it comes to placing the litter boxes for your cats, you probably have to experiment a bit while finding the perfect location.

The Current Litter Box Is Not To The Cat Liking

So you have enough litter boxes for every cat you got but somehow, one of them still likes to pee the bed of your dog? Well, the cat might feel that his/her litter box to be insecure or outright inappropriate and decide to go to a more comfortable place. Fortunately, the answer to this situation is straightforward: get a new litter box that resembles the bed of your dog. Remember to bleach the dog bed before that as cats tend to urinate at the spots that got their scents.

Drawing The Boundaries Of Territory

Just like dogs, cats love to mark their territories using their urines and sometimes, the dog bed seems to be a comfy place to secure. In most of the case, the situation could be tackled with relative ease by giving the cat his/her territory. Install cat trees, shelves along with all pieces of furniture so the cats don't have touch the floor as they move through the house. That should help to minimize potential territory disputes and hopefully also eliminate the issue of "cat pee on dog bed".

Cats have to deal with their own emotion and occasionally, peeing happen to the way they use to reduce stress.

If your cat urinates on the dog bed due to anxiety, you would likely encounter cat pee on various part of the house as well. In that situation, the only way to remove the "cat pee on dog bed" issue is to locate the stressors and get rid of them.  After the stressors are gone, the cat should become reasonable calm which would put an end to the inappropriate urination.

Tips And Tricks To Make Your Pets Live In Harmony When it comes to co-existing between dogs and cats, personality plays an important role. It's very unwise for you to raise pets side by side knowing that they definitely would not get along.

Think About The First Impression:

The first meeting often leaves lasting impressions which means you must think carefully before introducing your pets to each other. In most of the case, it's widely advised to let the pets get to know the other party scent then proceed to visual stimulations.

To keep your pets from fighting over foods/territory, keep their feedings bowls and beds as far away as possible. Your pets are still animals in the end so don't assume that by spending time with humans, they would behave exactly as you anticipate.

Give Your Pets Regular Exercises:

Dogs and cats have plenty of accumulated energy which could explode without any warning if don't channel it well. One of the best methods pet owners use is to play with your pets so they expend most of their energy in a controlled manner.

Raise All Your Pets Together:

Pets that grow up together often learn how to treat each other territory and that lead to few disputes overall. So by raising your dogs and cats together when they are still puppies and kitties,  you probably would not have to deal with the "cat pee on dog bed" issue.