Is My Cat Part Siamese: An In-Depth Identification Guide

Suspecting that your fluffy friend might be part Siamese? See how experienced pet owner talk about the question: "is my cat part Siamese?".

Generally speaking, cat parents around the globe don't pay a lot of attention to the breed of their pets. As long as you enjoy the companion of your cat, why bother spending time to analyze its gene pool, right? That being said, a couple of people still wish to learn more about the background of cats that they raise. Considering the fact that the Siamese is a popular breed of cat, "is my cat part Siamese?" is a question commonly asked by inquiring pet owners. So is there a good way to identify cats that happen to have Siamese ancestors?

In case you are interested in determining the origin of your adorable cat, you come to the right place.  This article could show you everything you have to keep in mind about Siamese cats and methods to detect them. Overall, after generations and generations of mixed breeding, modern-day cats have features of different breeds that complete identification efforts. Nonetheless, if you manage to grasp fundamental issues, it's possible to answer the "is my cat part Siamese?" question. Check out the information down below to satisfy your curiosity.

Siamese: Overviews Of The Breed

Before we get to the "is my cat part Siamese?" question, it's a good idea to take a good look at the breed first.  The more you know about Siamese cats, the easier you could track down their offspring among cats from other breeds.

Derived from Wichien Maat cats, a cat breed of Thailand origin, Siamese cats are well known across the world for their affectionate, intelligence and playfulness. Cats in the breed like to seek out humans to cuddle and additionally, they socialize with other cats fairly well. In fact, Siamese cats actively build strong bonds with other beings in the vicinity which is why they tend to experience depression if left alone. Because of that, it's advised that you buy Siamese cats in pairs so they could keep each other company.

Nowadays, there are 2 groups of Siamese cats: Classic and Modern. The classic group further consists of 3 distinct varieties: Applehead, Old-style and Classic while the Modern group contains only 1: Wedgehead. Initially, Classic was the sole group in the breed but as the popularity of Siamese cats increases, there were demands for a more slender look. Therefore, people conducted selective breeding and the result of the process is the Modern group. Both groups come from the same distant ancestors but now, they are unique sub-breeds.

In term of life expectancy, Siamese cats have a relatively high rate of mortality compared to other breeds of cats

Normally, the average cats could live for between 10 and 12.5 years. Scooter, a Siamese cat that holds the world record for the oldest male cat, passed away at the age of 30. Common causes of death in the breed include neoplasms, urinary tract disease, progressive retinal atrophy,... One issue that also put Siamese cats at risk is the lack of tapetum lucidum, an important structure that amplifies dim light in the eyes. 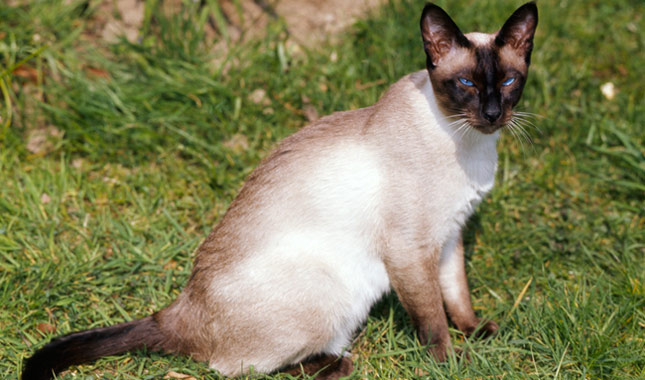 Want to get a reliable answer to the "is my cat part Siamese?" question and have some money to spare? In that case, it's strongly recommended that you search around for a place that could perform cat ancestry tests. To put it plainly, the test would compare the genetic profile of your pet with databases that store the profiles of different breeds of cats. Although there is a high chance that the profile of your cat is unique, it's going to share some DNA variants with certain breeds. The result of the test should you if your cat is part Siamese or not.

Regarding precision, the cat ancestry test possesses a high level of accuracy (above 90%) so you have nothing to worry about here. You need to pay a considerable sum of money for the test though so the method is far from economical.

For people that have tight financial situations, the most sensible method to identify the breed of a cat is to assess its body and behaviors. Needless to say, the result of the method is not as precise as an actual cat ancestry test but it's much better than nothing.

As some Siamese cats are originally bred to achieve specific features, a quick glance at the shape of your pet might reveal a useful lead. Generally speaking, Modern Siamese cats have a slim, angular and somewhat skeletal body in addition to a rather thin neck. From the first look, cats in the Modern group seem elegant which often earns them high regard in cat shows. On the other hand, Classic Siamese cats are comparatively "thicker" than their Modern counterparts in various places: neck, tail, limbs,... Pay attention to these differences.

Usually, Siamese cats have a white coat with dark patches on the face, ear, tail,... However, extensive mixed breeding has introduced multiple patterns that prove a bit tricky to track. Here are some common variants that you need to remember. The provided patterns exist on both groups of Siamese cats.

People consider Siamese cats to be extroverts: cats in the breed tend to hang around their owners and other cats. If your cat is part Siamese, it's highly likely that it would spend time sitting in your lap and then when night comes, it should sleep near your bed. As Siamese cats are curious pets, they often follow you all over the house in order to know what is going on with its owner. Additionally, Siamese cats enjoy physical activities so if your cat likes to play fetch, chew toys and chase laser pointers, it might have Siamese ancestors.