My Cat Hates Other Cats: In-Depth Analyses And Solutions

Your fluffy friend tends to be hostile toward other cats and you don't why? Check out this article to solve the issue of "my cat hates other cats".

Generally speaking, people often think of aggression in cat-to-cat interactions as a fairly minor problem and there is no need for human intervention. That being said, pet owners would feel extremely frustrated if they have to deal with frequent quarrels between their cats.  Not to mention the mental strain they put on the owners, catfights could inflict serious injuries upon the cats themselves. "But why my cat hates other cats anyway?" you wonder. Well, there are many probable explanations behind the overly aggressive behaviors in cats along with ways to improve the situation. Things should get better if you how to diagnose/adjust the reactions of your cats.

You are a first-time cat owner and the number of fights started by your cats really drives you nut? If that happens to be the case then you have come to the right place. This article contains essential information regarding the issue of "my cat hates other cats" including causes potential and proper solutions. Overall, it's not difficult to correct the behaviors of cats as long as you know what you are doing. Cats are quirky creatures so you need to take things at a steady pace, rushing the process is ill-advised. Put the reference down below to good use and you could get rid of the catfights once and for all.

As mentioned above, cats don't get along well due to a lot of reasons ranging from anxiety to fear. If you manage to figure out what makes your pet tick, it's pretty easy to solve the issue of "my cat hates other cats". Here are some of the most likely culprits that you must keep an eye out for while assessing the situation.

Cats are quite sensitive when it comes to territory and associated resource and that mean if other cats invade their designated space, conflicts inevitably occur. Therefore, if you intend to introduce a new cat to the house, don't toss him/her in right away as it could provoke catfights. In addition to that, territorial aggression might flare up right among household cats that have no qualm living side by side up until very recently. In such situations, the younger cat likely reaches social maturity and soon starts competing for territory with the older cat.

In the case that you already have all of your cats neutered, mating aggression is often less than a problem. On the other hand, if you fail to neuter your male cat, expect some troubles in the feline mating season. Male cats fight with each other in order to secure access to female cats even when you don't have one in the house currently. A female cat in heat passes by the house while spraying hormones is all it takes to trigger the fight. Once the boys pick up the emitted scents, everything would get heat up in just a blink of an eye.

As with humans, female cats that just birthed a litter are protective of her children and mood swings are common.

In a lot of cases, the mom proceeds to snap at virtually anyone that comes close to the kitten including whom she was formerly friendly. Fortunately, such hostile behaviors should subside once the litter is weaned and you really don't have to do anything. Again, people that own neutered cats would not experience this kind of aggression as neutered pets could not have children.

Also known as redirected aggression, cats that are suffering from anxiety tend to act aggressively against other cats in order to reduce the stress somewhat. The stressor could be signs of feral cats, loud noises, abnormal smell and so on.  After you are certain that anxiety is the cause of your "my cat hates other cats" issue, it's important to eliminate the stressor or at least limit its influence. Most of the time, it should calm down your pet and the frequency of aggression would be reduced considerably.

Ironically, the preferred method that the average household cats use to play with each other is fighting (or play fighting). From the outside, it might look quite serious but play fighting is, in essence, a perfectly healthy and fun endeavor for both of the cats. That being said, play fighting could develop straight into actual fighting at any moment if one party gets agitated and take it up a notch. In most of the case, careful observation and timely intervention are essential to prevent your cats from hurting each other.

How To Resolve Disputes Between Your Cats: Tips And Tricks 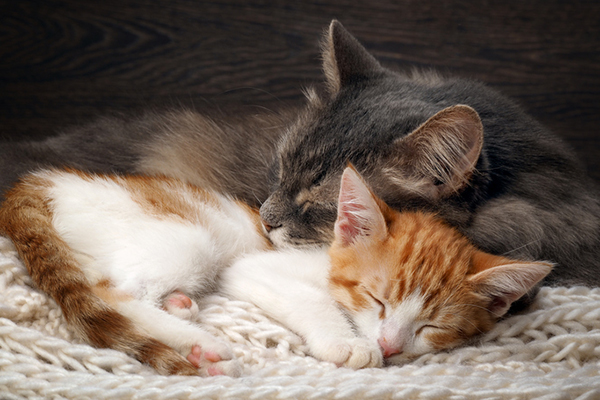 Cats don't exactly like to share and that is why you need to provide them with their own territory. Proceed to increase the number of toys, litter boxes, cat trees and so on to decrease the chances of conflict. Once your cats feel that their personal needs and requirements are met, they should get along with each other just fine.

The first meeting often leaves a lasting impression so if your cats start off on the wrong foot, take it back to the very beginning. Get the victim into a room of its chosen and then place the bully in another room in the vicinity

With a bit of luck, it would repair and improve the relationship between your cats.

While it's generally unwise to let catfight to proceed, you must not use force to break up the fight. To stop the fight, spray some water into the face of each cat instead of using your own bare hands. In the case, the cats walk away with a reasonable attitude, promptly hand out treats to reward their positive behaviors.

In certain cases, the vet could provide you with medication in order to curb the aggressive behavior of your cat. While medication is far from a permanent solution, it gives you room for further training.

Occasionally, being aggressive happens to be the very nature of one of your cats and there is really nothing you could do to change it. In that scenario, the only practical method is to keep the cats in separate rooms through the placements of facilities or an electronic cat door.