Why Does My Cat Lick The Shower Curtain?

Why does my cat lick the shower curtain? Is that because he or she is craving for different smells? Let’s find out the true reasons why the kitty is like that. 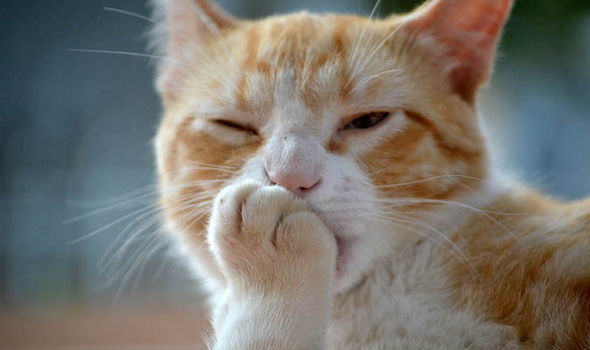 According to the survey, Americans do love kitties. Thus, they’re all willing to help out their pets whenever it’s possible by making a question about the weird cat behavior: “Why does my cat lick the shower curtain?” This has become the biggest concern among the cat owners until now, especially when the cat does it every morning, during the day and at night. In fact, there are several reasons as to why they might get crazy over the polymers, and here they are:

Most plastics are often treated with the stearates that come from the tallow - it’s a rendered form of mutton fat, and often made up of the triglycerides. Following some certain sources, they claim the lanolin (the oil used to make sheep coats tends to feel greasy) is also availed in the whole making of plastic.

And such things are easily appealing to such a curious carnivore like your kitty. Besides, Gelatin is said to be used in the photo emulsions, which also explains the whole strange allure of the old-looking Kodak moments.

Why does my cat lick the shower curtain? There’s a good reason for that! It’s good to know the plastic even contains some chemicals that can copy pheromones and other attractants. And such a substance easily causes a social response in members of the same species.

Thus, the licking plastic action here may be the extension of the flehmen reaction. This is a manner in which a certain animal will curl back its upper lips, breathes in, and then holding this posture for many seconds. And that also tells you why a few cats love to urinate on the plastic bags as well.

Cats do this weird thing just because they like to lick something that is really strange to them, from the plastic bags, blankets to the sinks. As Dr. Leslie discussed everyone’s concern “why does my cat lick the shower curtain?” Just think about it when the cat has to use all of her senses, even the taste as an exact way to test things out.

Accept the fact that licking is harmless, even with the non-food product, as long as your cat doesn’t ingest them at all, then it’s completely fine. However, note that the natural sense of the cat's curiosity occasionally gets it into trouble.

The strange behavior of the cats can lead them to sometimes taste the harmful ointments, foods, gels, and residues that are quite toxic.

As stated by Dr. Leslie, when your feline buddy seems to like licking almost everything in its sights even that isn’t her dinner, and including her fur, her lips, then it’s probably because she worries or gets bored. According to her, a normal cat tends to spend half of her time she’s awake grooming herself. And if the kitty is doing that more often, it possibly leads to her hair loss.

As the licking reaction starts to cut off their fur, then it’s your turn to intervene. The question “Why does my cat lick the shower curtain?” has the answer already. This is because excessive licking is commonly seen as a sign of having parasites, suffering neurologic illness, food allergies, and even endocrine disease. Unluckily, these conditions will lead to greater skin irritation for the cats.

If so, then how to help your kitty get out of the problem? To draw the feline friend’s attention onto something other than licking at herself, let’s engage her in a game offering her some greens and windowsill with a nice view. Doing so surely helps enrich her surrounding space and discourage her unsuitable licking action.

How about using the bitter sprays? This only helps solve the situation temporarily, and they won’t ever solve the underlying reason for such weird behavior. Instead of that, you’re highly recommended to work with the vet or the veterinary behaviorist to address this issue once it keeps being like that.

Just forget about the use of shampoos or showers since cats indeed need their tongues to keep them clean. You probably don’t know that the tongue of a kitty is filled up with hundreds of little bristles pointing backward - we call them the papilla. As Dr. Leslie said, it enables your kitty’s tongue to play an effective grooming tool or a comb, but it’s a comb featuring the small and reverses cups to help them hold the liquid.

Last but not least, the best way to keep a cat disinterested in any sort of plastic stuff is by drawing them to some particular items that are not even plastic at all. Give your pet the most fun and safe toys of various textures and fabrics. Simply use the feather wands and even your laser pointer to interest your kitty. If not, then avail the catnip and treats to allure it to other types of items you like them to play with. However, only take your cat for a checkup if she appears doing it obsessively. As it seems like her hobby, then don’t worry too much about it. And that can’t be a big problem as long as she doesn’t lick anything poisonous.