"My Cat Won't Leave Me Alone": Causes And Solutions

Cats are adorable creatures but they could be quite annoying as well. Check out this article and learn how to deal with "my cat won't leave me alone" issue.

For most cat owners, it feels great to play with a soft and fluffy cat every once in a while. That being said, things might get a bit irritating once your attention craving cat decides to follow you without break. To constantly have to watch out for your cat while moving around the house so you don't trip over him/her is outright tiresome. Through the Internet, you could find multiple discussion/debates regarding the issue of "my cat won't leave me alone", each has its own explanation of this kind of behavior. Which guide should you follow in order to stop your cat from being too clingy?

Well, in the case you are overwhelmed by the number of tips and tricks, this article got something for you. You would be shown potential causes of "my cat won't leave me alone" issue as well as appropriate solutions in each of the case. For most of the time, it requires a good deal of time and effort to properly take care of the dependent tendency of your cat. As a result, it's of utmost importance that you don't lose your patience and rush the correcting process.

Quick Reminder: It's strongly recommended that you take your cat to a qualified vet first if your cat gets clingy all of the sudden. Although the chance is low, the behaviors could be a way the cat use to notify you that it feels uncomfortable due to certain illnesses. After you get an all-clear from the clinic, you could confidently correct the cat clingy tendency knowing that it's not a physical problem.

Before we address the issue of "my cat won't leave me alone", it's a good idea to understand some principles about cat thinking. Overall, it's highly likely that a normal cat would not develop overly clingy behaviors if it feels safe and secured as it grows up. It's natural that cat owner wants to pay special attention to their kitties but overdependence is a troublesome problem. Aside from that, cats that are suffering from depression (caused by new environments, separations,…) could have substantial changes in behaviors. In some cases, a cat would refuse to eat until you stay near them and the more you keep up, the worse the dependency get.

Top 5 Causes Of "My Cat Won't Leave Me Alone"

Cats tend to depend heavily on their human owner if they feel defenseless or unable to grasp their immediate surrounding.  In such situations, they think of humans as their protectors as well as food providers. As a result, it's not uncommon for ordinary cats to follow you everywhere you go when they don't feel safe on their own.

Similar to other animal, cats that live through a difficult period often fear that they would be abandoned/abused again.  The action of these cats reflects their worry and acting clingy is an obvious consequence in most of the case. In their eyes, you are probably the first person that provides them with comfort and kindness after a long time.

The Cat Is Recently Introduced

Generally speaking, while attempting to adapt to brand new environments, cats often look around for a dependable and reliable ally. Needless to say, for most of the time, the ideal choice is the person that feeds and looks after them.

The Cat Got Separated Early

A lot of kittens are separated from their mother far too early and that form a long-lasting separation anxiety. In the mind of these cats, they fear that they would be separated without warning from you, their new mommy. Hence, they mostly try to spend as much time as possible around their "mommy" which lead to overly clingy behaviors.

As with the human child, it's not wise to give in to the demand of cats too easily since that could reinforce their dependent tendency. Encourage actions like petting and cuddling also worsen the situation, the cat feels that their requests are always fulfilled which cause further troubles later on. That is the reason why you must make sure that you treat your cats in a gentle yet firm manner.

Top 3 Solutions For "My Cat Won't Leave Me Alone" 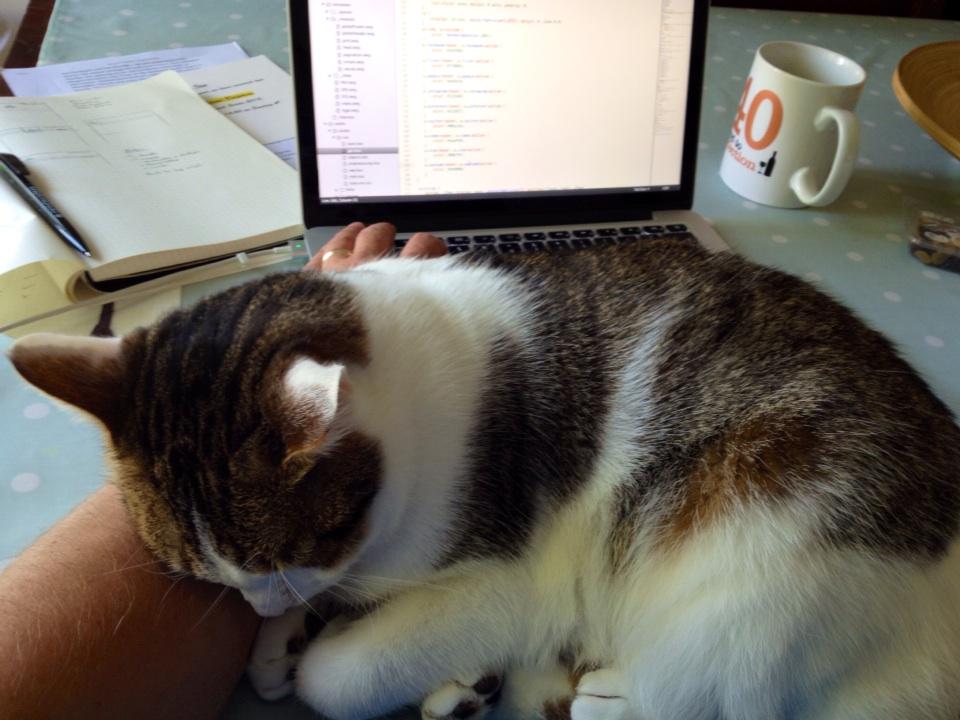 Teach Your Cat Some Manners

Cats do whatever they want regardless of you think but it's possible to keep them from bothering you constantly. To achieve that, you must teach your cat that there are moments when you don't want to be disturbed. For example, the average cats just love to sit on warm appliances such as laptop and needless to say, they often get in the way. At that moment, you must scold your cat and proceed to remove him/her.  Keep doing that until the cat learns to respect your wish.

Give Your Cats Good Routines

You think that most cats simply don't want to follow a schedule? Well, you are in for a surprise.  In most of the case, if you manage to stick to your routines, your cat would attempt to fit into it without causing any problems. Various "my cat won't leave me alone" cases have been solved successfully after the owners figure out how to put together an appropriate timetable. Namely, set out time to cuddle with your cat but once the playtime is over, promptly move on to the next task without any hesitations.

Don't Give In Easily

Now that seem pretty easy on paper but in reality, numerous people are simply unable to keep it together when their cats start meowing mournfully. It sounds slightly harsh but you need to give your cat the cold shoulder treatment. Some cuddling every once in a while is good but don't react to the manipulative behaviors of your cat.  Once the cat shows signs that he/she knows how to behave properly, do remember to give out suitable rewards.

Find stuffs to navigate your furball's attention, such as scratchers or self-playing toys.