"My Cat Caught A Mouse And It's Still Alive": What Cat Owner Should Do

"My cat caught a mouse and it's still alive" is an issue that often troubles first-time pet owners. Check out this article and see how to deal with it.

Through the process of domestication, household cats have managed to drop various behaviors that are associated with their wild ancestors. That being said, certain natural instincts remain until this very day and the need to hunt is considered to be among the most notable ones. Even when there is an abundance of quality cat food in the house, your cat could still head out to hunt every now and then. Needless to say, no one wants to see their pets place random preys on the house carpet, dead or alive. A lot of first time owner of cats have significant difficulty solving the issue of "my cat caught a mouse and it's still alive".

Don't know how to stop your cat from bringing its preys into the house? In that case, you have come to the right place. This article contains virtually everything a cat owner needs to know regarding the instincts and tendencies of the ordinary cats. Once you got a firm grasp on the motivations behind your cat behaviors, modifying his/her habits should not take too much time and effort. Check out the provided information and you could put a definite end to your "my cat caught a mouse and it's still alive" trouble.

Hunting: The Nature Of Cats As mentioned above, the average cats are simply unable to resist the urge to hunt, it's in their nature. No matter how long they have lived alongside the human, most cats could not help themselves from pouncing on mice, bird,… In most of the case, cats tend to express their desire to hunt through the way they play with toys that closely resemble potential preys. While household cats are often provided with a steady supply of food by the human, they would nonetheless jump on targets of opportunity at moment notice. In addition to that, if cats feel that something is about to escape their grips, they want it even more.

Why Your Cat Decide To Present Its Preys To You 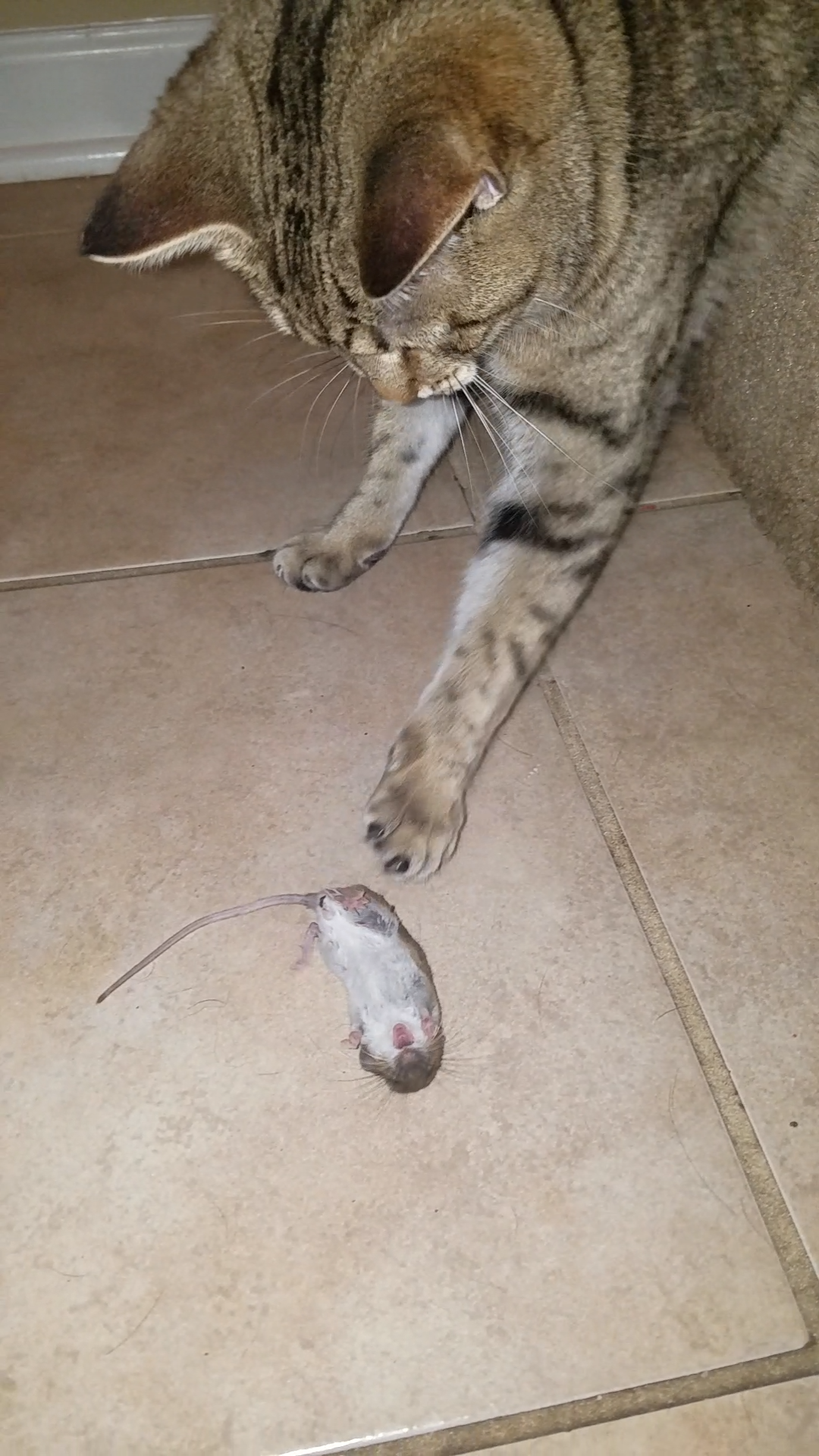 For most of the time, the reason why your cat offers you its prey is not too complicated: He/She thinks of you as his/her family. In the mind of your cat, it needs to share its "foods" with loved ones which explain the prey offering. Once again, it worth noting that all of these prey hunting behaviors does not indicate that your cat feels hungry. It's highly likely that somewhere in the house, you have a feeding bowl that is full to the brim with food for your cat. The decision to hunt has nothing to do with the food supply, cats chase after preys just because they have to.  But is there anything that makes your cat specifically decides to bring back live animals?

As you already know, cats are natural-born teasers so it's really no surprise that they like to take their sweet time with everything.  In this case, your cat simply keeps captured preys alive to prolong his/her victory: He/She has won the battle and secured the prize. So what is the best way a usual cat could use in order to brag about such a wonderful achievement?  "Yes, let's give the prey to my human servant". That is pretty much the way "my cat caught a mouse and it's still alive" problem begins in earnest. Funnily, some cats (especially the female ones) might even think that their caretakers could practice hunting using the offered preys.

Aside from the listed causes, there is also another probable explanation about the offering of live preys by your cats. In the wild, female cats taught their kittens how to hunt and then kill preys through a prompt neck bite. However, domestic cats that got separated from their mother early often lack the skill to properly deliver the final blow. When being cornered, preys that cats hunt could cause considerable injuries which may cause a certain level of hesitant on the side of the cat. Hence, household cats occasionally bring live preys into the house so their human owner could take care of the killing.

What You Could Do In Order To Resolve The Situation Now you know what causes the "my cat caught a mouse and it's still alive" issue, let's see how to improve the situation. You could either use a single method or combine everything to achieve maximum prevention effectiveness. Take account of your cat temper as well so you could figure out what options work best in your situation.

Consider Getting A Belt Collar


Cats rely extensively on the element of surprise while sneaking up on potential preys so a noisy belt is often sufficient to foil their attempts. As long as the belt remains attached to the collar of your cat then mice, birds and so on would easily detect the cat presence. Using the belt, you could let your cat roam the outdoors as it please but the chance that he/she may come back with a live prey is fairly low.

Provide Your Cat With Stimulations


Hunting requires substantial effort on the cat part which means if your cat is sufficiently worn out, it may decide not to chase after prey. One of the best ways you could satisfy the hunting urge of your cats and exhaust its pent-up energy is to get some toys. Prioritize movable/dangle products as the movements of the toys would stimulate the cat, causing it to pounce on them.


The easiest way to ensure that cats don't follow their hunting instinct is to raise them as indoor pets. By clamping down on the availability of hunting ground, your cat would have few chances to present you live preys. That being said, you should let your cat explore the outdoors once in a while to get some fresh airs and exercise his/her body. Keep a close eye on your cat through the process through in order to prevent it from claiming a couple of trophies here and there.